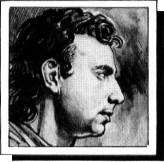 While Mother is resting, JON BATES is able to slip away, with the hope of compiling his seasonal shopping list. Passing through the reception area of the Motel he is waylaid by a number of guests with problems. What other choice has he but to answer their questions?

Hmm... Jason Porter seems to visit quite a bit. In fact he’s been booked in twice this month. (See, not all the guests end up in the swamp.) First of all he’s sent in a program in response to a plea for a pitch bend routine for the 128 some six months back. Hacking at his work a bit, I can deliver the following short program...

The pitch will bend up when you press ‘a’ and stop when you press the space bar. The first three lines set up the sound addresses and the last line sets up the pitch bend. If you reverse the 213 and 190 and STEP +1 in this line it will invert the bend. To speed up the bend then step in greater numbers. However you will find out that the 128 annoyingly has the lowest number bending towards the top of the scale and the highest at the bottom. To wind the dog up try going to a value of 10 instead of 190. With a little bit of thought it is possible to put this pitch bend as a subroutine for any note you play — you have to get it to add or subtract from the note value played. And if you wanted to turn your 128 into an instrument it is quite easy.

Press ‘q’ and it will play a note. It is the 213 that sets the pitch. You might like to try other key assignments with other numbers; say 190, 169, 160, 142, 127, to set it up as a musical dinky toy. Bore everybody rigid with silly tunes until they immerse you in brandy sauce and wave a match around your ears.

‘Not all guests end up in the swamp’

Jason also wants to know if there’s a commercial audio tape available for samplers (he has a Casio SK1). Yes, there are, but they are quite often very, very expensive. Usually only available on CD as well. The tapes and disks you see advertised are nearly always formatted for a particular sampler. Jason has obviously realised this, for fresh out of the mailbox is his own formatted tape of 35 samples for the Cheetah Sampler which vary from drums, synths, chords, thunder, whistles and a few rhythm patterns to boot. He has grovelled and worn out several knee pads in his attempts to get the Motel to look at this. Anyway he is willing to let you have the samples for one pound, which will probably save a lot of messing about and for that price you can’t really complain. You can always chop them about to your liking anyway.

‘... until they immerse you in brandy sauce’

Stefan Drissen writes from Holland to say that he is suffering with lack of volume for his Spectrum sounds. By his description he has a 48K version only. Now he has tried putting it though the tape deck, but found that at his computer users’ group the sounds were lost against wails of Amigas. Originally there were a few companies that marketed sound boosters. To be quite honest they were usually overpriced, as the parts you need are not that expensive. The cheapest way is to buy a converter plug that turns the mini-jack ear socket into either a phono or guitar jack socket. Thus equipped you can either boost the sound through a hi-fi or a small guitar amplifier. If you are really serious you can buy small guitar amplifiers quite cheaply, especially second-hand ones. However, the sound is not all that clean and after a certain volume there is a lot of background noise to put up with. But if you are determined to blow those Amigas out of the water then I reckon that’s the best way to go about it.

Simon Duffy writes in a peculiar language from Insch in Aberdeenshire. I think it’s an attempt to be cool and happening, but roughly translated it means he has a Music Machine and a 128 and he is desperate for a 128 program that will give the extra memory for the Music Machine, both for samples and sampling. The brutal truth is that to my knowledge no-one is doing a program purely for the 128. All the programs I have seen run in the 48K mode, if you have lashed out on the 128 hoping that it will give you greater memory then I fear that you’ll be disappointed. I tried prodding a few phone numbers and got the same answer: they all run in 48K mode. I would be very grateful if there is a program out there that runs in 128 mode only for the Music Machine, as it would add to the versatility of the samples resident in the program. However, it would not mean that you will have higher quality samples as although you can (theoretically) store greater sample lengths, the sampling rate is the thing that determines the quality. And you can’t convince the 8-bit machine to sample any faster than it is aready doing. The only solution is to improve on the hardware — filters and analog to digital converters. The original Fairlight sampled in 8-bit, so it is possible, but at a cost. In fact the Fairlight used a very complex software-controlled routine to compress and expand the samples, rather like a noise reduction system, so that the whole dynamic range of the sample utilised the maximum memory space. But back in the Motel we are not able to come up with anything that will supercharge the Music Machine specifically for the 128.

‘All the programs I’ve seen run in 48K mode’

Paul Slaney has written in with a tape program of a tune for me to listen to and also a few enhancements to the CRASH Tech Tape. Not really my dept, but since the Motel has the into then here it is.

For the Turbo Loader — to disable the BREAK key when loading POKE start address +302,255. To change the header speed, POKE start address +29,(135 – 255) where 135 is the fastest. He is also prepared to reveal to the world that if you save the code from the Turbo Tape program with the speed factor on 3, POKEing start address =16 and +39 lets you save and load programs at hyperspeed without needing special equipment. I refrain from comment as this is really not Motel material. However you can be assured that all tapes received will be judged and the results made known in the next issue where the Motel will round up the musical offerings of the year and predict a few things. Send all correspondence to the usual address and Mother and myself will sort out the musical problems in amongst reviewing etc. Time to get my Christmas shopping list together. Now where was I? Shower curtain... mop... carborundum stone... new wig...