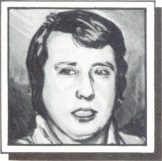 Suffering, like us all, the after effects of the postal dispute (and PC Show), IAN CULL takes a look at a couple of ’zines, and mutters something about the PC Show. But there is that new Sinclair to get excited over. Or is there..?

Is it a Spectrum? Is it an ST? No, it’s a disappointment

The much rumoured Sinclair PC 200 was finally launched at the PC Show, although it is unlikely to be seen in the shops until November. It is quite a large machine compared to the Spectrum — 18 inches long and 13 deep — but at least it is BLACK, and has the SINCLAIR logo. However, that is where the Sinclair family heritage ends. The new computer is as similar to the Spectrum in use as was the ill-fated QL. The PC 200 is, in fact, an Amstrad PPC512 in a black case and has no real chance of running any Spectrum software, or even making use of data created on the Spectrum.

The new Amstrad, sorry, Sinclair has a ‘proper’ IBM-compatible keyboard (with more than twice as many keys as the Spectrum), laid out identically to an Amstrad PPC; a single 3.5 inch floppy disk drive (holding up to 720k of data as with the PPC); a mouse and built-in parallel and serial ports (for connection to printers, modems, etc). A second disk drive can be fitted externally.

The base machine, at £299 (+VAT), has no display, but does have a built-in TV modulator circuit so that a standard colour television can be used. This is almost a revolution in IBM-compatibles, since most other machines require a dedicated monitor for their display. Unfortunately, this means that the display quality is not good. The display driver is the IBM CGA standard, which is never a clear display — even on ‘real’ business computers. The much clearer, and expensive, MDA display can only be used with the optional monitor (£100 extra for monochrome, £200 extra for colour).

‘But at least it is black and has the Sinclair logo’

On the plus side the PC 200 is at least a true IBM-compatible, running industry standard software programs — there are even two expansion ports (!). However, I would question the usefulness of these since standard IBM expansion cards are nearly twice the height of the computer! The computer would therefore need to be open permanently, allowing dust etc to cause untold damage. An Amstrad representative said that he knew of no ‘extension case’ which would cover any fitted expansion cards. There is also the question of how much spare ‘power’ is available in the machine for running expansion cards.

The PC 200 is obviously designed as an ‘Atari-basher’, as it is the same price, uses the same disks and has the same memory capacity (512K — which can only be upgraded by using an expansion slot).

Unfortunately for Sinclair aficionados (like Simon Goodwin and myself), the Atari is a far superior home entertainment system. In graphics mode, the Sinclair has only a four-colour display (see the purple mountains in the Amstrad brochure) — less than even the Spectrum, and IBM sound facilities are Spectrum quality! The Atari has sixteen colours at the equivalent resolution, plus a three-channel sound chip. There is, admittedly, quite a lot of IBM software available at launch — especially as the PC 200 uses ‘proper’ IBM joysticks (unlike the old Amstrad PC1512), but the Atari now has a good software base too.

‘The computer would therefore need to be open permanently’

Where the Sinclair PC 200 will be useful is if the owner already uses an IBM compatible — perhaps at work. Since machines should run all IBM software, a spreadsheet can be used at home, in between playing games. The problem is that business computers still use the older 5.25" floppy disk standard, although the 3.5" is now also establishing itself. In addition the external disk drive can be 5.25" drive if required, but this is really only of use when transferring files. Having incompatible drives on different computers is an annoyance, having them on the same machine is almost impossible!

Moreover the ST, ironically, can even challenge the PC 200 on IBM compatibilities since there are programs available which will simulate an IBM PC on the ST. This would allow business software to be used, whilst still retaining superior games-playing capabilities. But obviously the PC 200 is much more likely to run PC programs without compatibility problems — and faster as well.

In conclusion, if you seriously wish to upgrade to a 16-bit games computer this instant, buy the Atari ST (or the Amiga, if you can wait for the machine’s insides to be found by more programmers). If you’re more interested in the serious side of things, most particularly with PC compatibility, the PC 200 might be worth considering (among the other 10 million PC models that Amstrad also produce!)