BORROWING IMAGES FROM THE TEE VEE 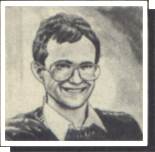 The SUNSET VIDEO DIGITISER for the Spectrum brings out the best artist in me. I don’t know how I do it, but within a couple of seconds I can create the most realistic pictures ever seen on the Spectrum screen.

The possibilities are enormous. Just plug in the family video camera or the rent-a-video recorder and you’ll spend hour after hour tracking down interesting subjects and shading them to perfection for the final print-out. The video frame can be the starting point for an exceptional games loading screen, which can be manipulated with any screen graphics utility to the point of non-recognition. Or ultimately, the digitiser can be part of the home desk-top publishing system, incorporating pictures into editorial text for your local family rag. Either way, the SUNSET VIDEO DIGITISER provides lots of fun.

THE PIXEL OF THE MATTER

Now everybody knows that the Spectrum screen is not a bottomless cup of pixels, but a mere conglomeration of 256 x 192 lonely points, so the TV resolution picture loses somewhat in definition when converted to the Spectrum format. Busy or overcrowded pictures end up rather unrecognisable, but if larger subjects are focussed on, the perception is definitely good. The lower resolution provides a grainy artistic touch, highlighted by the many shading facilities. Taking a picture results in each point or pixel on the Spectrum screen being allocated one of sixteen values representing the brightness level. This master file is stored outside the screen area and requires no less than 24576 bytes.

As the screen dots can only assume two states, on or off, intermediate levels can be displayed in various patterns of dots. Three grey scale modes are available. ‘Black and white’ provides just two display levels. The brightness of the picture can be adjusted by setting the trip level between black and white to any of the sixteen values. ‘Black white and grey’ divides the sixteen levels into black, white and one grey level. Again, the two boundaries may be set to accentuate the darkness and the amount of grey zones in the picture. ‘Full grey scale’ provides black, white and three grey levels and imitates the photographic image on the Spectrum screen as closely as possible. Again, the grey scaling can be set by varying the grey, black and white boundary levels.

One of Franco’s heroines, MARLENE DIETRICH in a guest slot on the Spectrum screen. This sequence of pictures reveals the way in which the same digitised image can be tinkered with using the software that comes with the SUNSET DIGITISER

Yes, I’m afraid part of the equipment is encapsulated in the usual black interface box with an insignificant phono socket as a major landmark. A cassette tape for the software support together with the NLQ print manual comes with the package. A phono cable with two converters ensures access to any type of video equipment (phono plug, BNC socket and plug). Push interface into lifeless Spectrum, link up to video unit, switch on Spectrum and load software from cassette. Camera roll... ACTION!

Who doesn’t like to be driven by a menu? (It’s all that drives Gary Liddon — ED.) Eight options are available — only one modifies the master file containing the basic picture information. TAKE PICTURE sets the 8-bit A/D converter in motion and transfers the video picture to memory. During six seconds, the software has to convert the 8-bit value from the converter into 4-bit data acceptable to the Spectrum memory size. No flash conversion means a rock steady picture is required for the six second duration. No wobblies, NO ACTION, in front of the video camera and a pretty good freeze frame facility on the ol’ video recorder. Noise bars need to be fought into the bottom edge, or even better into oblivion.

Unsuccessful attempts at grabbing a frame are met with a beep, followed by the PICTURE ANALYSER screen, which displays anything from a missing frame sync to a signal format error; this could be wrong number of lines, wrong line length or wrong field format (Interlace, odd, even).

Successful frame grabbing can be improved upon by SET INPUT LEVELS. Maximum and minimum levels representing the contrast of the current picture are analysed and evaluated for a further take. The second scan converts the 8-bit data with a corrected ratio into 4-bit giving maximum contrast.

MOVE INCOMING PICTURE takes into account the fact that only part of the TV picture is transferred to the Spectrum and allows the conversion window to be positioned over the relevant TV screen area for a further take.

Having lost all the colour information of the original TV picture it might be a good move to display the mono picture in different colours. CHANGE DISPLAYED COLOURS does this at a touch of a key. Unfortunately, there is no provision for changing the border colour. Individual colouring can be accomplished at a later stage once the screen has been stored to tape or cartridge using SAVE/RETRIEVE PICTURE to save the screen picture as a screen file or save and load the master file for further manipulation at a later stage.

Provision is made for producing a backup copy of the software onto cassette or Microdrive cartridge. The reverse side of the cassette contains a print driver routine which can be set up for various printers and printer interfaces. The manual gives a detailed explanation of the control program and provides the programmer with call addresses for the various machine code routines.

The SUNSET VIDEO DIGITISER is not a cheap add-on for the Spectrum. Unfortunately it is one of those devices which grab your imagination and you’ll find yourself spending far too much of your valuable time designing excellent looking screens with the least possible artistic requirement. No news yet on the printer ribbon that allows you to make iron-on transfers of your pictures for application to shirts — more details next month, hopefully.