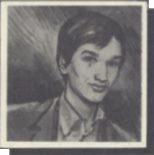 After many months of patient waiting, BRENDON ‘What d’you mean I can’t have 16 pages’ KAVANAGH finally gives the readers their chance to question him on his favourite subject (after himself that is), Playing With Your Mail...

THIS MONTH Mailbox starts with an update on the latest games. Those of you who are sick of all those hack ’n’ slay role-playing games will be interested to hear of a light-hearted game by CRASH’s own Philippa Irving (and a few of her mates). It’s a sci-fi fantasy/farce PBM game entitled Revenge Of The Many Legged Man Eating Mutant Tiger Hounds From Outer Space (strange, she always seemed such a normal person), and it seems to be quite popular. Revenge is a very strange game ‘for the literate and the imaginative’ (looks like Brendon won’t be very good at it then — Ed). Any fans of alternative role-playing games should write to the Alchemist’s Guild.

David Callan has been running his company, Whitegold, since June 1987. The pilot game, entitled Whitegold (very original) and purchased from Ben Parkinson, is still going strong. Recently, two other new games have appeared from the Whitegold stable.

The first is a simulation of Napoleonic warfare. Fog Of War gives me the impression of being a poor man’s version of Muskets Of Mule. Designed by the illustrious Schubel & Son Inc (sounds more a family piano-making business), the game boasts plenty of ‘real world’ locations and a good selection of militia, armed regiments etc. It is fought on both land and sea, but differs from the Napoleonic wars in that 18 countries have become involved. Players have to decide which of the three alliances each country joins. Compared to many PBM games, however, there is a lot of scope for any fun-loving wargamer to enjoy. Startup to CRASH readers costs £6 (startup, large map and free turn), while future turns cost £2.25 each.

There are a few extra charges but these are for services rarely required (knowarramean).

According to David, Balance Of Power is a fighters’ game. Experienced players who enjoy the rapidity of games such as Harrow Posters excellent The Weapon will probably enjoy this game. I understand that it takes a few turns to get into, yet the earliest player death so far is turn three! The game is set in a world comparable to ours at the time of the World War I. Twenty countries are drawn into the hostilities, and a well presented map is provided. Conscripts, heavy artillery, battle ships and aircraft are all available, and players choose what level of military technology they think is needed.

The game has a heavy leaning upon strategy, and from studying the rulebook I also get the impression that the easiest way to win is to form an alliance with another state which has the right armaments to boost your own efforts — plenty of scope for diplomats!

Balance Of Power would suit anyone looking for a bit of excitement who could not afford Global Supremacy, but can afford £2.25 per turn for a similarly styled game. (Brendon’s Interesting Fact 1: did you know that the Global Supremacy software could not distinguish between land and sea?) (No, but who cares? — Ed.) Startup for CRASH readers is a very generous £5.

It you require any further information on the above games then do not hesitate to send Whitegold an SAE for more information. The offers closes on October 1.

The man from the bowels of Records at Chester’s NatWest bank takes a look at the latest reader rantings on all that’s hip and trendy in the world of PBMing. (Plus a few other things as well — cos there aren’t that many hip and trendy things in PBMing!)

Dear Brenny Babes
I am in the process of setting up a bulletin board devoted to wargaming, using my Spectrum and modem. To go with this bulletin board I would like to run a Play By Modem game.

My reason for writing is that I need some advice on the format of the game, bearing in mind my lack of experience of modem gaming and the fact that the game would be run on a Spectrum. I would point out, however, that the Spectrum is backed up with disk drives, so memory should be no problem.

I would much appreciate any help that CRASH readers could give me to set up this service.
Mr S Heyward

Let’s face it. I know absolutely nothing about playing with modems. Can anyone out there assist this young man?
BK

Dear Bendy Brenny
I’m ashamed to say that I first heard of PBM in March 1988 but I immediately became fascinated by what I learned. However, I still haven’t got a clue what PBM exactly is or how I could join in the Netherlands and if I need special equipment, such as a printer, to play. Can you help?
S van der Hyden

You can play a Play By Mail game from anywhere in the world. Many producers offer special versions for foreigners. Play By Mail games are basically a multi-player strategy/war/adventure/fantasy game played through the postal system (another game altogether) over a long period of time. All game players pit their wits against each other, doing whatever the game says you must do. You don’t even need any special equipment! Your game position (on computer printout) is sent to you by the person running the game. Study this printout, complete an orders form and send the form back to the game moderator. These orders are carried out at the same time as the orders from other players and the results returned to you by post. And so the game continues. On each turn you attempt to better your position in the game by whatever methods are available to you.

That, in a (very small) nutshell, is Play By Mail gaming. (Mmm. I’ve always wondered what he’s going on about — Ed.) Just look around the CRASH PBM advertisement pages for some addresses to write off to. And, whatever you do, ENJOY YERSELF!
BK